Uganda on Thursday launched the China-built Isimba Hydropower Dam in the country’s east. The $568 million dam is expected to improve access to power in Uganda, where less than 30 percent of people are on the grid, and cut power costs.

However, the dam has come at a price for residents.

For many locals, the Victoria Nile River is their only source of water to do laundry, bathe, and collect water for use at home. But a fence is being constructed to close access to the river.

It is a river that families depend on, says local resident Diana Namuli.

She says children swim whenever they want, but soon that won’t be possible. Mothers also will not be able to send their children to fetch water, Namuli says. 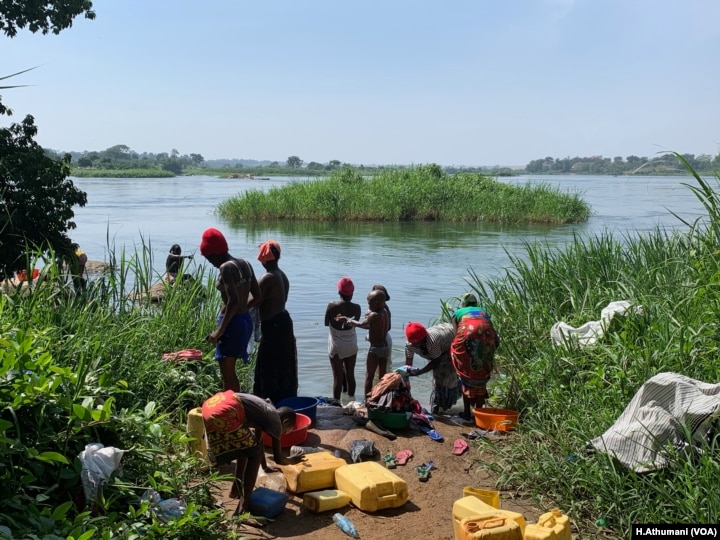 Women bathe and do laundry at the shores of Victoria Nile River, Kayunga district, Uganda.

The dam constructed by China International Water and Electric Cooperation will increase electricity access, but it has come at a price for the local ecology as well.

Before the dam, this Uganda part of the Nile River brought tourists to its waterfalls and wildlife. Visitors came to see red-tailed monkeys and endangered pangolins, among others.

At the official launch of the dam Thursday, officials acknowledged choosing 183 megawatts of clean power over access to water and natural beauty.

“It’s been a delicate balance for government,” said Simon Kasyate, spokesman for the Uganda Electricity Generating Company. “And we had to make that choice. And therefore, with the coming in place of this hydro power station, it meant that of course we destruct the social setting up of the communities around. Where someone walked with their little jerrycan and fetched water off a stream, now you have got a reservoir which is a Lake. Where someone simply walked through and crossed to visit their kith and kin across the river, now we have a hydropower station that has its own restrictions because of the safety nature and the safety precautions that we put around.” A man looks on at a fence being dug around the Isimba Dam in Kayunga to keep residents away from the shores of the Victoria Nile River in Kayunga district, Uganda.

In addition to the Isimba Dam, China is financing the $2 billion, 600-megawatt Karuma Hydropower Dam, in northern Uganda.

Uganda’s future generations will see if the electricity is worth the cost.