Hours before embarking on a his first official visit to Africa, U.S. Secretary of State Rex Tillerson said the United States is committed to building on a “strong foundation of U.S.-Africa relations” and accused China of “encouraging dependency” in its approach to the continent.

In a speech Tuesday outlining the Trump administration’s Africa policy, Tillerson said the United States is “eager” to lower barriers to trade and investment in Africa, whose largest trading partner by far is China.

“Chinese investment does have the potential to address Africa’s infrastructure gap, but its approach has led to mounting debt and few, if any, jobs in most countries,” Tillerson added. “When coupled with the political and fiscal pressure, this endangers Africa’s natural resources and its long-term economic, political stability.”

Representative Chris Smith, chairman of the House Subcommittee on Africa, Global Health, Global Human Rights, and International Organizations, released a statement that said China’s activities and actions on the continent have “propped up kleptocrats and autocrats.”

“Although Africa needs sustained investment and engagement from members of the international community, China has been largely a negative actor in the region for some time,” Smith said. 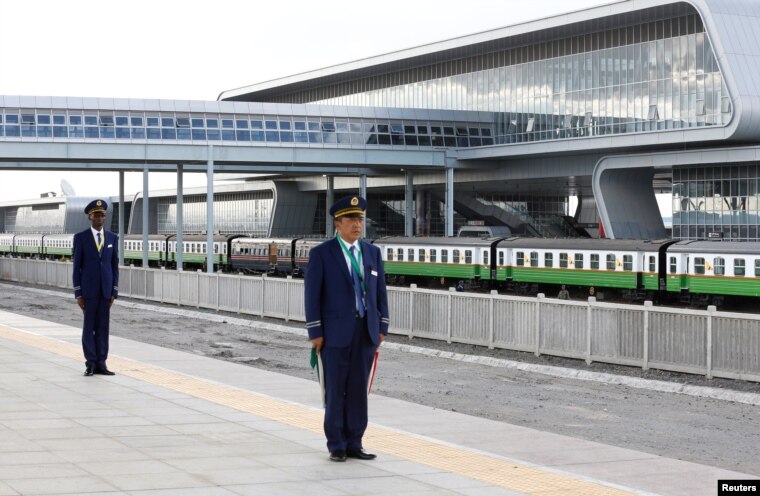 FILE - Kenya Railways attendants prepare to receive a train launched to operate on Standard Gauge Railway line constructed by the China Road and Bridge Corporation and financed by the Chinese government as it arrives at Nairobi Terminus, May 31, 2017. (Reuters)

The U.S. lawmaker added China “is building military relationships and partnering with one-party states, often to the detriment of good governance, the rule of law, and the African people themselves.”

Former Assistant Secretary of State for African Affairs Linda Thomas-Greenfield told VOA on Tuesday that Tillerson is “absolutely correct” on Chinese influence in Africa, but “he did not say what will done to counter balance that influence.”

In Ethiopia, for example, total U.S. investment of around $567 million, is dwarfed by Chinese investments, which are more than $15 billion, according to the State Department.

Some experts say Washington and Beijing can both benefit from their work on the continent, even though China is focused on infrastructure and the United States is focused on education and health care.

“The U.S.-Africa versus China dynamics doesn’t necessarily have to be, I think, an either/or,” said Christina Golubski, an assistant director of Brookings Institution’s Africa Growth Initiative.

“The opportunities for engagement from different partners in the continent is quite great,” she added. “Our country’s security and economic prosperity are linked with Africa’s like never before,” the top U.S. diplomat said before an audience at George Mason University just outside of Washington.

The trip comes two months after President Donald Trump triggered a wave of controversy when he reportedly referred to some African nations as “s***hole countries” during an Oval Office meeting on immigration with a bipartisan group of senators.

The African Union, which represents 55 countries on the continent, demanded an apology from Trump. A group of African ambassadors to the United Nations also denounced Trump’s remarks, saying they were “outrageous, racist and xenophobic.”

After more than a year in office, Trump has not nominated a chief U.S. diplomat for Africa, and embassies in the Democratic Republic of Congo, Somalia, South Africa and in five other African countries remain without ambassadors.

Tillerson is scheduled to meet with top officials in the allied nations of Chad, Djibouti, Ethiopia, Kenya and Nigeria, some of which are helping in the battle against rebellions from jihadists linked to al-Qaida and Islamic State. 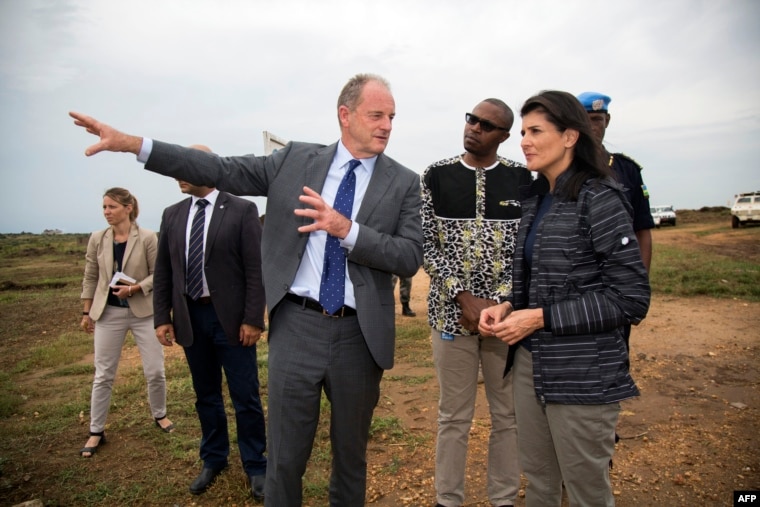 “To understand where the world is going, one must understand Africa is the future,” Tillerson said, noting Africa will be home this year to six of the world’s 10 fastest-growing economies and will have one-fourth of the world’s workforce by 2030.

Without partnerships to build infrastructure and achieve more economic development, Tillerson warned there will be “new ways for terrorists to exploit the next generation.” He said the administration is willing to collaborate with African countries to address the “drivers of conflict” and to build the “institutional law enforcement capacity of African nations.”

Tillerson also said U.S. and African leaders “must work to find long-term diplomatic solutions” to regional conflicts “that cause so much human suffering.” He announced the United States will give $533 million in additional aid to alleviate famine and other needs caused by conflicts in Ethiopia, the Lake Chad Basin, Somalia and South Sudan.