When the China-financed Nairobi-Mombasa Railway opened in May 2017, it became Kenya’s largest infrastructure project and a high-profile achievement for President Uhuru Kenyatta ahead of his successful bid for re-election.

The 440-kilometer line cuts travel time in half and promises to make goods drastically cheaper to ship. But by August, widespread administrative issues, including difficulties with ticket purchases online and on the day of travel, had stymied passengers, leaving some to wonder whether the project had been rushed to completion.

As operational issues smoothed out, deeper concerns emerged. The railway cost Kenya nearly $4 billion and may take decades to pay for itself. Environmentalists worry about the impact on a vast nature preserve, and an independent analysis suggests Kenya overpaid, according to research compiled by the China-Africa Research Initiative (CARI) at Johns Hopkins University. 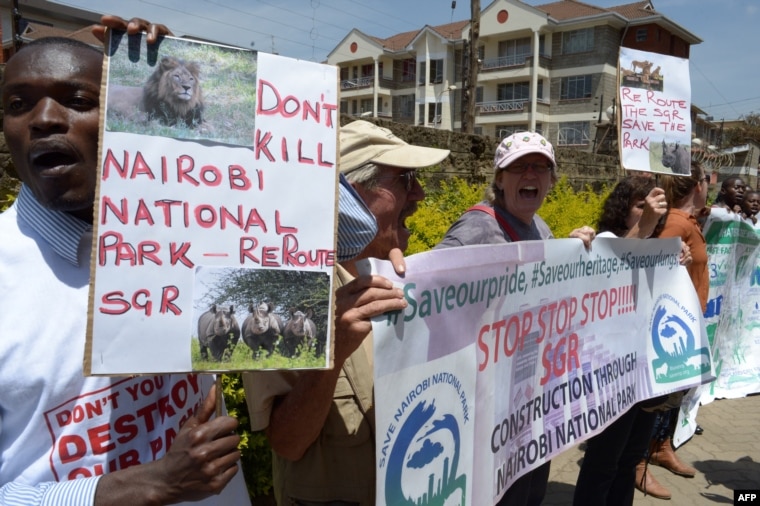 FILE - Demonstrators protest the route of the Standard Gauge Railway (SGR) being built by the Chinese government, which is to cut through the middle of the Nairobi National Park, at a rally outside the People’s Republic of China Embassy in Nairobi, Oct. 17, 2016.

Throughout Africa, China is investing in large-scale infrastructure projects like the Nairobi-Mombasa line. A half-dozen railways have launched in recent years, along with dozens of other infrastructure projects, including bridges, dams, roads and power plants. These projects appear to benefit all sides. However, they often lack proper vetting, and deals unfold with little transparency.

Experts worry that the drive by African governments to industrialize could backfire, and seemingly useful projects will become white elephants — overpriced, underutilized showpieces that do little to drive economic growth or benefit local communities.

Chinese involvement in African infrastructure dates to the 1960s, when talks opened with Tanzania and Zambia to build an ambitious post-colonial railway from Dar es Salaam to Kapiri Mposhi, just north of Zambia’s capital, Lusaka. The TAZARA Line, built by China and financed with a more than $400 million, interest-free loan, still operates, despite ongoing maintenance issues and occasional strikes. It was China’s first major African infrastructure project and remains the longest Chinese-built line on the continent.

More recently, China has shifted its engagement from resource-rich countries in West Africa like Angola and Nigeria to emerging economies in East Africa like Kenya and Ethiopia. 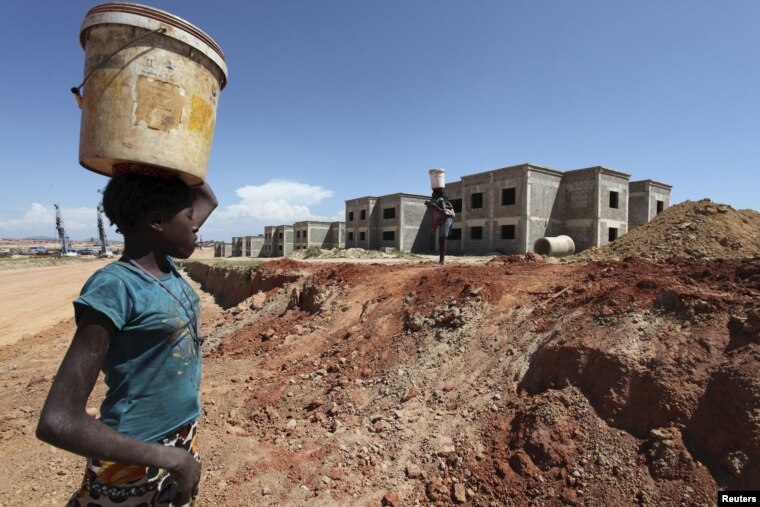 FILE - A woman walks past a Chinese construction site in Lubango, Angola, March 5, 2014.

New partners have brought new approaches. In a 2008 deal widely criticized by the World Bank and others, China offered billions in infrastructure development to Angola in exchange for a decade of tax-free mining in the country.

As its focus has moved to East Africa, China has downplayed deals for minerals and interest-free loans with more conventional financing and deeper partnerships.

For example, a new railway connecting Ethiopia’s capital, Addis Ababa, to Djibouti was financed in large part by a commercial loan from the Export-Import Bank of China.

Beyond strengthening ties in dozens of countries around the globe, China’s international investments create export markets for Chinese labor and goods, provide access to natural resources, standardize Chinese technologies, and enable the world’s second-largest economy to manage $3 trillion in foreign assets. The investments also help China lessen risk through a diverse portfolio of projects that complement its increasingly ambitious political and security objectives.

For African countries intent on economic growth and industrialization, China represents a willing partner that can bring massive projects to completion with speed and ease, said Yunnan Chen, a doctoral student at Johns Hopkins University who recently completed fieldwork in West Africa.

Short term, African countries stand to benefit from the transfer of skills and technology, job creation, and increased capacities to ship goods and move people. 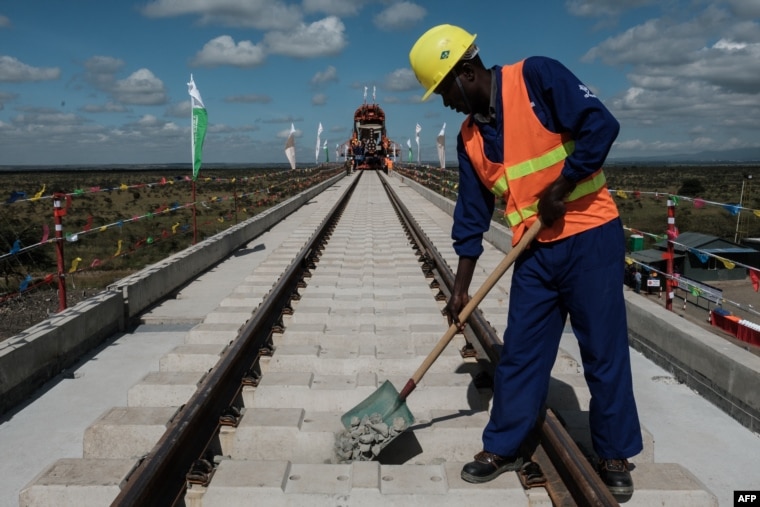 FILE - A Kenyan worker lays gravel at a construction site for the Standard Gauge Railway (SGR) in Nairobi, Kenya, June 23, 2018.

Infrastructure projects bring symbolic benefits as well, highlighting nations’ independence and self-determination. That’s particularly true for rail projects, which often replace colonial-era lines that were used to move resources out of Africa, before falling into disrepair.

Unlike colonial-era foreign investment, Chinese-backed projects have intrinsic value for Africa, experts agree. But those real benefits can mask unfairness and corruption, which can result in deals that disproportionately benefit China and projects that aren’t driven by real demand, undermining efforts to industrialize.

China, whose $11 trillion economy is more than five times larger than all of Africa, has signed multibillion-dollar contracts without competitive bidding, raising concerns that African countries have overpaid for projects that could take decades to produce a return on investment.

That’s a particular concern with the new line connecting Nairobi and Mombasa. It’s one of the latest fully operational Chinese-built railways in Africa, but it’s not clear that Kenya got a good deal.

In a 2013 analysis of alternatives to the project, the Africa Transport Unit at the World Bank concluded, “There is no economic or financial case for standard gauge in the EAC [East Africa Community] area at this time.”

An investigation this month by The Standard, one of Kenya’s largest news organizations, concluded “Chinese nationals have created a small kingdom in which they run roughshod over Kenyan workers who say they are experiencing neo-colonialism, racism and blatant discrimination.”

Kenya Railways has launched its own investigation into claims of mistreatment shortly after The Standard’s reporting.

Despite the potential for negative impacts, planning that could help minimize these effects often falls short.

Uwe Wissenbach and Yuan Wang, researchers with CARI, determined that “ideally, social and environmental impact assessments should be carried out before the project begins to evaluate and mitigate the negative impacts on the local population; however, this is often not done or done inadequately.”

Without proper planning and oversight, promises of skills training and technology transfer can also fail, further diminishing the value for African partners. And work that could be completed by African laborers is, at times, undertaken by Chinese. FILE - People hold Chinese and Djiboutian national flags as they wait for the arrival of Djibouti’s president, Ismaïl Omar Guelleh, before the launching ceremony of a China-financed 1,000-unit housing construction project in Djibouti, July 4, 2018.

“You do see Chinese digging ditches and laying bricks and doing other stuff that’s sort of silly because they can — they should be — hiring Africans to do that,” said David Shinn, a former diplomat and a professor of international affairs at George Washington University.

‘Two or three wins for China’

Chinese firms do have policies to manage social and environmental impacts. But “how they get implemented on the ground or how much attention is paid to them does depend a lot on the capacity of the host government and the host institution,” Chen said. “If you don’t have adequate monitors, if you don’t have a strong enough government on the ground to enforce their own laws and to enforce these policies, then you run into trouble.”

In the case of the Nairobi-Mombasa line, Wissenbach and Wang recommend that Kenyan authorities rigorously assess and communicate to the public the long-term economic and financial impacts of the project.

African countries carry the brunt of the risk, Shinn said, but China gets the biggest reward.

“Keep in mind that this is a loan from a Chinese bank. A Chinese company by contract is required to build the projects on an enormous amount of that loan money that’s going to go straight into the pocket of a Chinese state-owned company. It’s going to have a percentage of Chinese labor,” he said.

“And most of the material that goes into the project will be manufactured in China. So, Chinese companies are making a profit on that. There are two or three wins for China, you know, [and] one win for Kenya and Ethiopia, being that they get a railway built that no other country is offering to build for them,” Shinn added.