China plans to fund and install modern reception centers, drinking water and cold storage facilities at main entry points on the border between Pakistan and Afghanistan.

The Chinese project aims to better serve the daily movement of tens of thousands of people as well as trade convoys, and will help ease tensions between the two countries, officials said.

Beijing, which is on good terms with both countries, continues to undertake diplomatic and economic initiatives to help improve Islamabad’s troubled ties with Kabul and encourage them to jointly work for a political settlement with the Taliban to end the Afghan war.

The deputy chief of mission at the Chinese embassy in Islamabad, Zhao Lijian, told VOA in a wide-ranging interview the border development program is an outcome of recent high-level talks held in Kabul between foreign ministers of the three countries.

“We are trying to promote these projects so that it can help with the improvement of relationship between Pakistan and Afghanistan and also finally it would be helpful with peace and development in Afghanistan,” Lijian noted. The trilateral dialogue, he said, was initiated by Beijing in late 2017 with a mission to promote “counterterrorism, strategic dialogue and pragmatic cooperation” among the three nations.

Lijian explained that the cold storage facilities will be established at the busy northwestern Torkham and southwestern Chaman crossings while the water schemes will be installed at the Ghulam Khan Khel terminal in North Waziristan district.

“Small businessmen they are entering Torkham and Chaman everyday so if there is some cold storage facilities they could use those facilities to store their fruits. If there is a proper reception center and a drinking water scheme, those kind of facilities may serve the people in a better way,” Lijian said.

Pakistan consumes 90 percent of Afghan fresh fruits and vegetables, according to official estimates. Islamabad recently waived off regulatory duties on fresh fruit imports from Afghanistan, leading to an estimated 30 percent increase in Afghan exports to Pakistan in 2018. Officials say some 60,000 people commute across the border between the two countries. 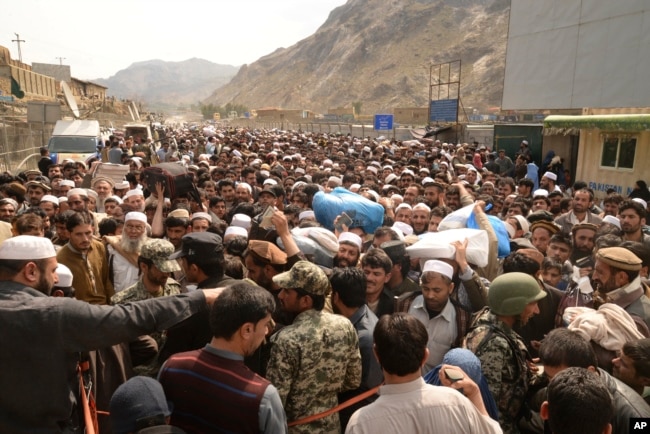 China and the Afghan conflict

The Taliban, championed by China as a political force in Afghanistan, allegedly uses Pakistan as a sanctuary for directing insurgent activities. Islamabad in turn accuses Afghan intelligence agencies of sheltering fugitive anti-state militants and supporting terrorist attacks in Pakistan.

Lijian said extending CPEC to Afghanistan, which is part of BRI, is under consideration to develop and improve trade routes through the war-ravaged country to Central Asia markets.

“For China, we have been having this 40 years of economic development, reforms and opening up, and in Afghanistan for these last 40 years they have been suffering from chaos, from civil war, from foreign occupation. So, we are very much sympathetic with Afghan people and we would like to extend a helping hand to them,” he said. Lijian defended Beijing’s close contacts with the Taliban, saying they are used to encourage the insurgents to seek an inclusive political understanding with incumbents in Kabul to help “manage” if not end Afghan hostilities in the near future.

“Pakistan has been helping the United States and the Taliban to have direct talks and it is playing a very critical role. We hope that the peace process can take some root in the heart of the people, not only in Afghanistan but also in Pakistan,” the deputy Chinese ambassador noted.

A spokesman for the Taliban’s political office in Qatar told VOA his group maintains close contacts with China and believes the Chinese are well placed to assist in resolving the Afghan crisis.

“We really appreciate their latest public stance of declaring the Taliban as a political force in Afghanistan. They understand the ground realities in our country. Their stance could be really helpful for Afghan peace building,” Suhail Shaheen noted.

US peace talks with Taliban

Pakistan takes credit for arranging the U.S.-Taliban peace talks to help bring an end to years of bloodshed in Afghanistan, saying peace in the neighboring country is key to promoting regional development.

Beijing has noted U.S. plans to draw down troops in Afghanistan if progress is achieved in talks Washington is holding with the Taliban. But Lijian cautioned against staging a hasty withdrawal.

“They should have a plan to withdraw from Afghanistan in a gradual way and during this process they should also try to promote the intra-Afghanistan dialogue so that when the American troops leave Afghanistan, Afghanistan will not be condemned into a chaotic situation like before,” the Chinese official noted.

China’s security concerns are also behind its stepped-up Afghan diplomacy. Officials in Beijing worry that continued instability in Afghanistan could encourage terrorist groups, including the anti-China militant group the East Turkestan Islamic Movement (ETIM), to foment problems in the western border region of Xinjiang.

International human rights groups have expressed concerns that authorities in Xinjiang are allegedly forcing Uighur and other Muslim minorities to renounce their religious beliefs in internment camps set up under the guise of vocational education centers. China rejects the charges as Western media propaganda.