Concerns about debt diplomacy on China’s expansive infrastructure megaproject — the Belt and Road — have become an increasing source of debate from Asia to Africa and the Middle East. In recent weeks, more than $30 billion in projects have been scrapped and other loans and investments are under review.

Public opposition is also testing the resolve of ruling authorities from Hanoi to Lusaka, the capital of Zambia, as concerns about Chinese investment build. 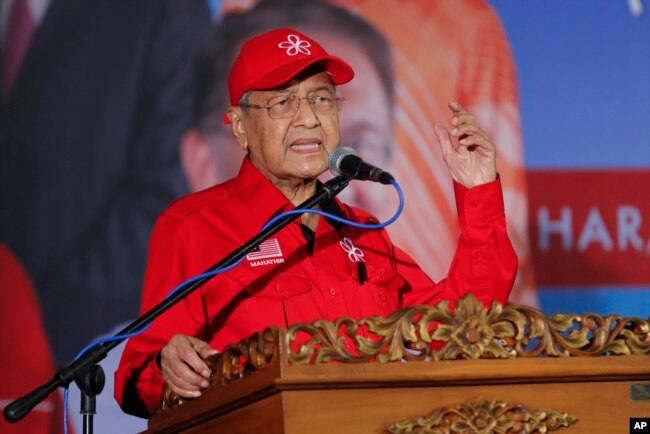 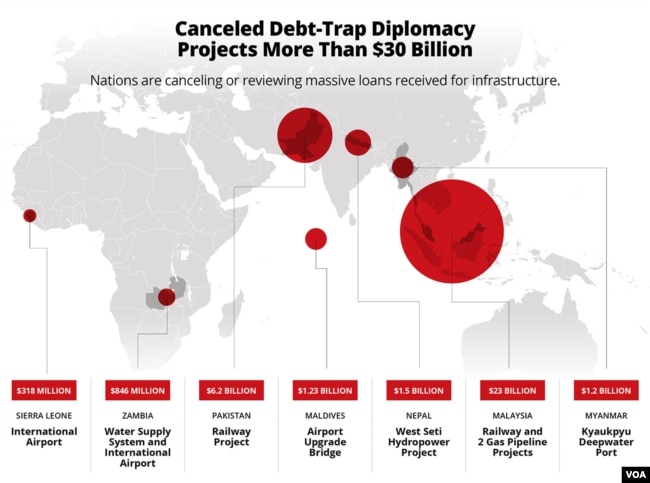 In some countries such as Vietnam, it is just the idea of Chinese investment — against the backdrop of the Belt and Road — that has led to push back.

Several Belt and Road projects have seen setbacks in countries where debt concerns have coincided with political elections and a change of power — be it Pakistan, Malaysia or the Maldives, says economist Christopher Balding.

“The people in these countries are very worried about the level of debt that these countries are taking on in regard to China and I think that is very important to note,” Balding said. “It’s not just anti-China people that are driving this, but that there is a lot of concern on the ground in the countries about that.”

China says there are no political strings attached to its investments and loans. It also argues it is providing funding in places others will not. But Beijing’s takeover of a port in Sri Lanka last year and the sheer volume of Chinese investments along the Belt and Road project have done little to ease those concerns.

Late last year, according to the New York Times, China agreed to forgive Sri Lanka’s debt in exchange for a 99-year lease of Hambanthota Port and 15,000 acres of surrounding land. 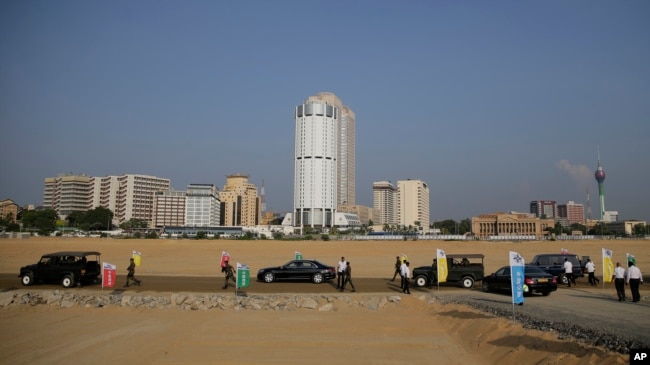 FILE - Visitors read instruction material about land that was reclaimed from the Indian Ocean for the Colombo Port City project, on the Galle Face sea promenade in Colombo, Sri Lanka, Jan. 2, 2018.

The government of Sri Lanka denies it divested land to a Chinese company, but the deal has convinced some that China is setting up debt traps to then take over the infrastructure that Chinese state-run companies build.

Hambanthota is one of 42 ports where China has participated in construction and operations, with more on the horizon.

In 2021, China will take over operation of one of Israel’s largest ports in Haifa. Beijing is also being eyed as a possible candidate for the development of Chabahar port in Iran, which is near the Iran-Pakistan border. 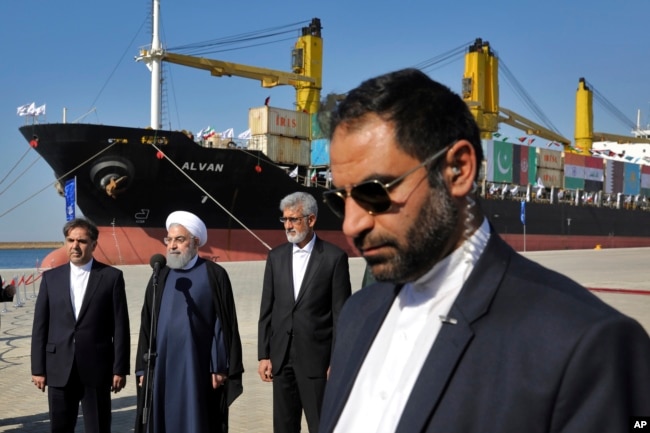 FILE - Iranian President Hassan Rouhani, second left, speaks during the inauguration a newly built extension of the port of Chabahar, near the Pakistani border, on the Gulf of Oman, southeastern Iran, Dec. 3, 2017.

The port proposal remains in limbo, however, due to U.S. sanctions. And that’s not the only obstacle, according to David Kelly, research director at the Beijing-based group China Policy.

“It’s in the driest and most remote part of Iran,” Kelly said. “It looks like a real loser commercially, unless it handles a lot of oil.”

Analysts say the Middle East, with its oil money and deep pockets, is less at risk for debt traps.

However, the port that is most likely to follow in Sri Lanka’s footsteps is Djibouti, a strategically important country on the Horn of Africa, where China recently established its first overseas military base. 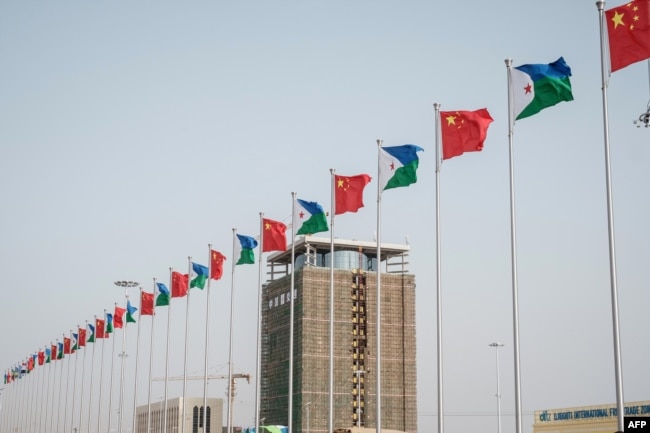 FILE - National flags of China and Djibouti are seen in front of Djibouti International Free Trade Zone (DIFTZ) before the inauguration ceremony in Djibouti, July 5, 2018.

According to official figures, Djibouti’s debt is more than 88 percent of the GDP and China owns $1.4 billion of that. That kind of debt overhang could lead to the same type of concessionary agreements as in Sri Lanka, analysts note.

A report released earlier this year by Washington, D.C.-based Center for Global Development said 23 of the 68 countries where China is investing for Belt and Road projects are at high risk of debt distress. Another eight, including Djibouti, are vulnerable to debt distress linked to future projects.

China argues its investments are aimed at boosting trade and commerce and giving developing countries a leg up.

China Policy’s Kelly says places where the debt situation is more critical are countries such as land-locked and poverty-stricken Zambia. There, concerns are causing a very public push for the government to disclose the full burden of Chinese debt.

“The upset and upheaval in Zambia recently, where you’ve got African civil society coming out and making this case,” Kelly said, “That is always going to be more significant where you have the local people, making a local case.”

Oh Ei Sun, a senior fellow with the Singapore Institute of International Affairs, says cancellations and changes are what he calls Belt and Road indigestion.

Concerns about debt traps and debt diplomacy will not have an impact on China going forward, he says, but stops, starts and cancellations will continue.

Oh says China’s model of development — build infrastructure and the economy will grow — may have worked at home, but it doesn’t always fit along the Belt and Road.

“In many of these Belt and Road initiative countries, if you lay out the infrastructure, it doesn’t automatically mean that trade and investment will take place,” Oh said, “Some of these projects will have to be more attuned to the local requirements of particular countries.”